Another pharmaceutical whistleblower and activist has been found dead, Brandy Vaughan, the founder of the Learn The Risk has died , according to a statement posted online on December 8.  2020.

It is with such a heavy heart that I list yet another activist found dead, and this time it is my friend and colleague, Brandy Vaughan, the founder of the well-known non profit Learn The Risk. She was found dead by her son who is a minor, Erin Elizabeth announced on  Dec 8. 2020.

RIP Brandy Vaughan most likely killed by big pharma for being a good person. Check out the comments from 2019 she made about if anything ever happened to her. pic.twitter.com/MO01Ud6ADx

She was found dead this morning by her 10 yr old child. She was a former Merck pharmaceutical employee turned whistleblower. She started the non profit group Learn the Risk to expose the Big Pharma drug cartel. she wrote she would never take her own life. #LearnTheRisk 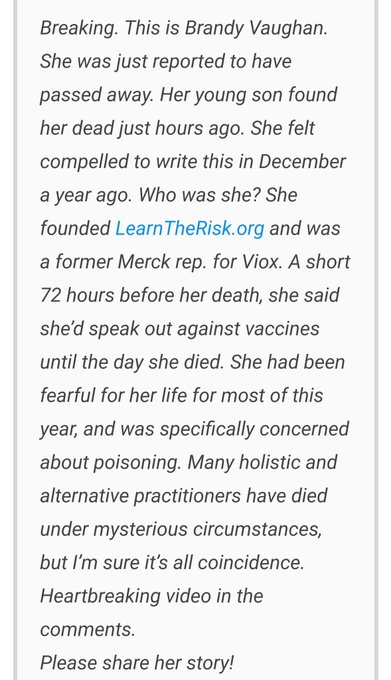 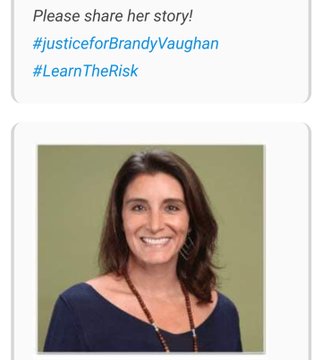 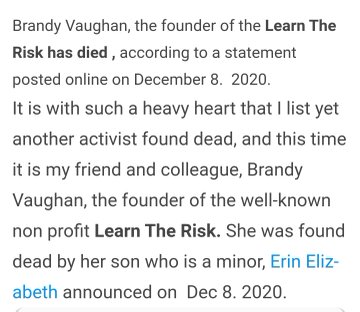 Brandy Vaughan found dead this morning by her 10 yr old child. She was a former Merck pharmaceutical employee turned whistleblower. She started the non profit group Learn the Risk to expose the Big Pharma drug cartel. she wrote she would never take her own life. #LearnTheRisk pic.twitter.com/6r8k9GMG7d

Reacting to the news of Brandy Vaughan death, Ashley Gallagher wrote on Facebook

Breaking. This is Brandy Vaughan. She was just reported to have passed away. Her young son found her dead just hours ago. She felt compelled to write this in December a year ago. Who was she? She founded LearnTheRisk.org and was a former Merck rep. for Viox. A short 72 hours before her death, she said she’d speak out against vaccines until the day she died. She had been fearful for her life for most of this year, and was specifically concerned about poisoning. Many holistic and alternative practitioners have died under mysterious circumstances, but I’m sure it’s all coincidence.
Heartbreaking video in the comments.
Please share her story! #justiceforBrandyVaughan #LearnTheRisk

So, So Sad
It is now being reported that Brandy Vaughan (former employee of Merck and whistle blower/founder of learn…

Brandy Vaughan, whistleblower and healthy mother of a 10yo son found dead this morning. Tragic loss! She posted this on Facebook last year. pic.twitter.com/KtYrICAsZl

Brandy Vaughan, founder of Learn The Risk, was announced dead today, found in her home by her young son.

Brandy Vaughan, a brave soldier with a mission to expose big pharma’s corruption.

She used to work for Merck, a company that was tightly associated with the nazi party, also known for their autism causing MMR vaccine.