The Old Trafford will keep hold of David de Gea till at least 2023 after he signed a long awaited and long term contract that will keep him playing for Manchester United till another three plus years.
The spanish goalkeeper,  28 years old signed a contract valued at 375.000 Pounds a week, and have the potential to extend it after 2023. As a result of this contract, he is now said to be the highest paid player at Manchester Uniter football club.
‘It has been a privilege to spend eight years at this great club and the opportunity to continue my career at Manchester United is a genuine honour” de  Gea reportedly said after signing the contract.
He was extremely excited and said he could not imagine he would be playing over 350 games when he first arrived at the club. 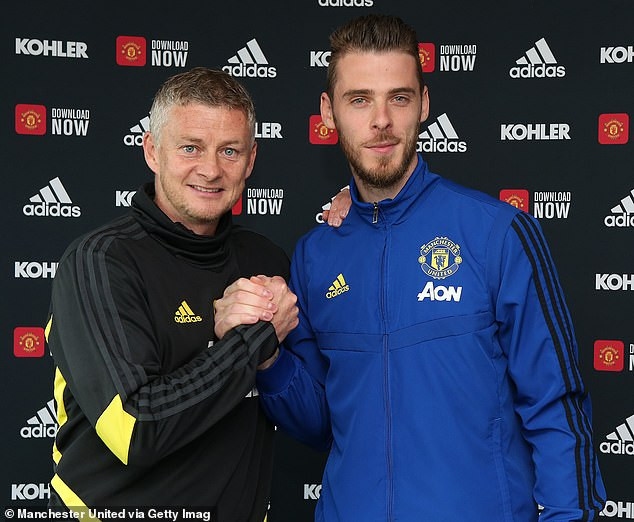 de Gear said he now hoping to help the team win more trophies now  that his future with the club is secured.
He also offered to help younger and new player in the team in any way possible to move the club forward.  He called himself a senior player and offered to support and lead in any way that I can to assist the younger players, so they know what it means to play here.
He continued, ” I believe this club, Manchester United can continue to build on its legacy of success and reward for our fans for their support and I feel I have so much more to offer this club.
I’m indebted to the fans who over the years has shown me their unalloyed support during the good and the bad times.
Also the club manager Ole Gunnar Solskjar released the following statements.
“I am delighted that David has committed his long-term future to the club. Over recent years, David has proved himself to be the best in the world and a vital part of our plans as we look to take Manchester United back to where it belongs”
He commended David de Gea for being a super fantastic player and person,  your outstanding qualities provide perfect base to our defense.
He continued,  “David represents everything you will want in a goal keeper. David has understood the values and what it mean to play for a successful club like Manchester United. As you all can see David is hungry and determined to achieve more, and we can’t wait to help him fulfill all his dream for Manchester United”