Google is paying homage to Felicitas Mendez, a Puerto Rican woman. She and her Mexican immigrant husband, Gonzalo Mendez, led a school desegregation fight in California. It set up the Brown vs. Board of Ed landmark case.
Google Doodle celebrates Puerto Rican civil rights pioneer and business owner Felicitas Mendez who fought school segregation in California in the 1940s. Illustration by Emily Barrera.

Who is Felicitas Mendez

Felicitas Gómez Martínez de Mendez was a Puerto Rican activist in the American civil rights movement. In 1946, Mendez and her husband Gonzalo led an educational civil rights battle that changed California and set an important legal precedent for ending de jure segregation in the United States. According to her profile on Wikipedia 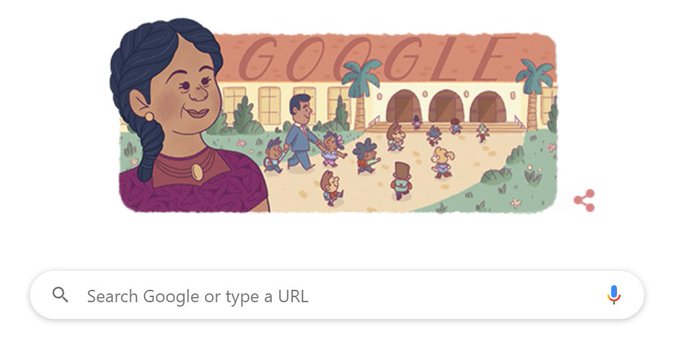 It’s the start of Hispanic Heritage Month! Today’s Google Doodle highlights Felicitas Mendez, the civil rights pioneer behind the 1946 Mendez vs. Westminster lawsuit which struck down California’s denial of Latino students an education based on skin color and ethnicity. pic.twitter.com/A6VFuztyzq

Jonathan E. Collins wrote
If you go to @Google ’s site, you’ll find a doodle of Felicitas Mendez. We praise the importance Brown v. Board in igniting school desegregation activism. But before Brown there was Mendez v. Westminster, and it just shows how long & hard we’ve been fighting for equitable schools.

Her children were refused enrollment to a school in California due to their skin color and ethnicity & she fought back in court—later segregation was ruled unconstitutional.

Isabel Morales, EdD wrote
Google Drive was having an epic meltdown today, so I shifted my lesson plan rt before class, & it worked out for the best!

99% of my students are Latinx, and admitted that they’ve only learned about Cesar Chavez, Dolores Huerta, and Frida Kahlo.

Girls Like Me, Inc. wrote
Felicitas Mendez was a business owner, a civil rights pioneer, and a good trouble maker. She is most known for her role in suing the school district in Westminster, California, after her children were refused enrollment at a local public school because of their skin color.

Carla McNeal, Ed. D. wrote
Did you know that Mendez vs. Westminster set a precedent for the desegregation of schools & that Thurgood Marshall later used some of the arguments from that case in Brown? Me neither. But the story is fascinating. Today’s Google Doodle honors Felicitas Mendez.