Inducted into the Canadian Football Hall of Fame in 1977, Coffey played in the CFL for 14 years as a kicker and receiver from 1959 to 1973, according to a statement posted online on Aug. 26, 2020 by saultonline.com

The Hamilton Tiger-Cat Alumni Association is sad to announce the passing of Tommy Joe Coffey. Tommy passed away at the age of 83 on August 25th. Tommy played for the the Tiger-Cats from 1967-72 He was a 7-time CFL All-Star, 3-time runner-up for CFL MOP and 2-time Grey Cup champ 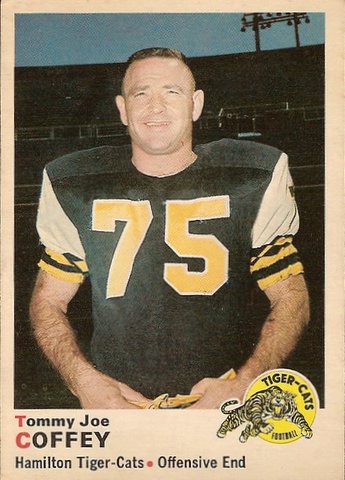 As a young fan of the CFL. Tommy Joe Coffey was one of the first star players I grew up watching. He had quite a career as a receiver. 7 time all-star – 3 time MOP Finalist and honoured by both the Tiger-Cats and Edmonton Football Club https://t.co/4rJIp7SpAR pic.twitter.com/Cc2CfKCWpZ

We are deeply saddened by the passing of former Ticat great and Canadian Football Hall of Famer, Tommy Joe Coffey. He was 83.

Sincerest condolences to the family and friends of Tommy.

Mark Urban wrote
I had the opportunity to meet Tommy Joe Coffey at his home in Burlington in August of 2018. He talked on camera about his time in Hamilton and what a privilege it was to be in both Hamilton and Edmonton’s rings of honour.

He was a fine man. Sincere condolences to his family.

Sincere condolences. He was a great asset to football and the Edmonton Eskimos.

Greg R Vince wrote
Condolences from a true ESKIMOS fan!! He was one of the greats of our esteemed team of Edmonton Eskimos!

Lawrence Wiley wrote
My condolences to one of the greatest receivers to play for the Edmonton Eskimos. Loved watching him play.

MaryAnn Baziuk wrote
Condolences to the Eskimo Organization and Tommy Joe’s Family. May his memory be Eternal! .

Nathan Wiebe wrote
What team was this again? The post doesn’t say. Guess we can’t do any “deadnaming”, huh? Can’t even be bothered to name the team he played for.

Pennie Pipke wrote
What an amazing talent gone but never forgotten as an EDMONTON ESKIMO and human of course. RIP dear one we will miss you.

J Lee Crowe wrote
Tommy Joe was my favorite player as a kid. I remember seeing many times when he played for the Tiger Cats…………..