One person has been arrested by the police in Los Angeles after threatening to shoot people in UCLA.

Here’s latest on the UCLA mass shooting threat and the odd, troubled lecturer, Matthew Harris, who held the campus in fear for 24 hours

Hey everyone UCLA philosophy department has just been threatened of a mass shooting from an ex professor pls spread the news because UCLA has not officially addressed the student body.
UCLA’s philosophy department has canceled in-person classes after a former lecturer sent a video referencing a mass shooting and an 800-page manifesto with “specific threats” to some department members Monday, according to material provided to The Times. 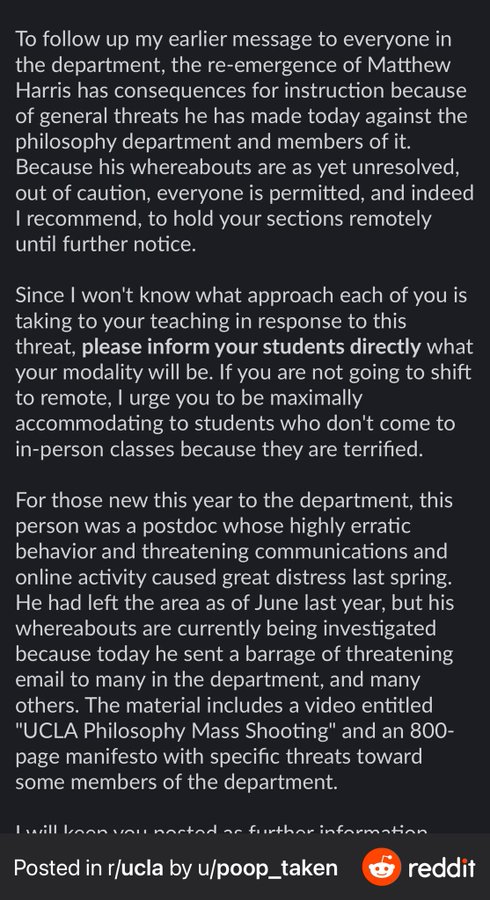 Matthew Harris, a former UCLA ‘philosophy of race’ lecturer was arrested by Colorado SWAT for threatening to commit a mass shooting against white members of the philosophy department. SWAT officers took Harris into custody after a 3-hour stand-off at his apartment.
UCLA was closed to in-person classes yesterday. Because this guy emailed “members of UCLA’s philosophy department a video referencing a mass shooting and an 800-page manifesto with ‘specific threats.'” He was already under a court ban from campus.

UCLA confirms via email that the person taken into custody by #Boulder police was suspect who reportedly made mass shooting threats to the school— Mitchell Byars (@mitchellbyars) February 1, 2022Read More

The UCLA lecturer mass shooting threat is awful, and was handled terribly. But as

knows, female faculty being targeted is all too common. When a student posted flyers around campus calling me a “pregnant nazi bitch” my university said there was “no threat

For those trivializing Whoopi