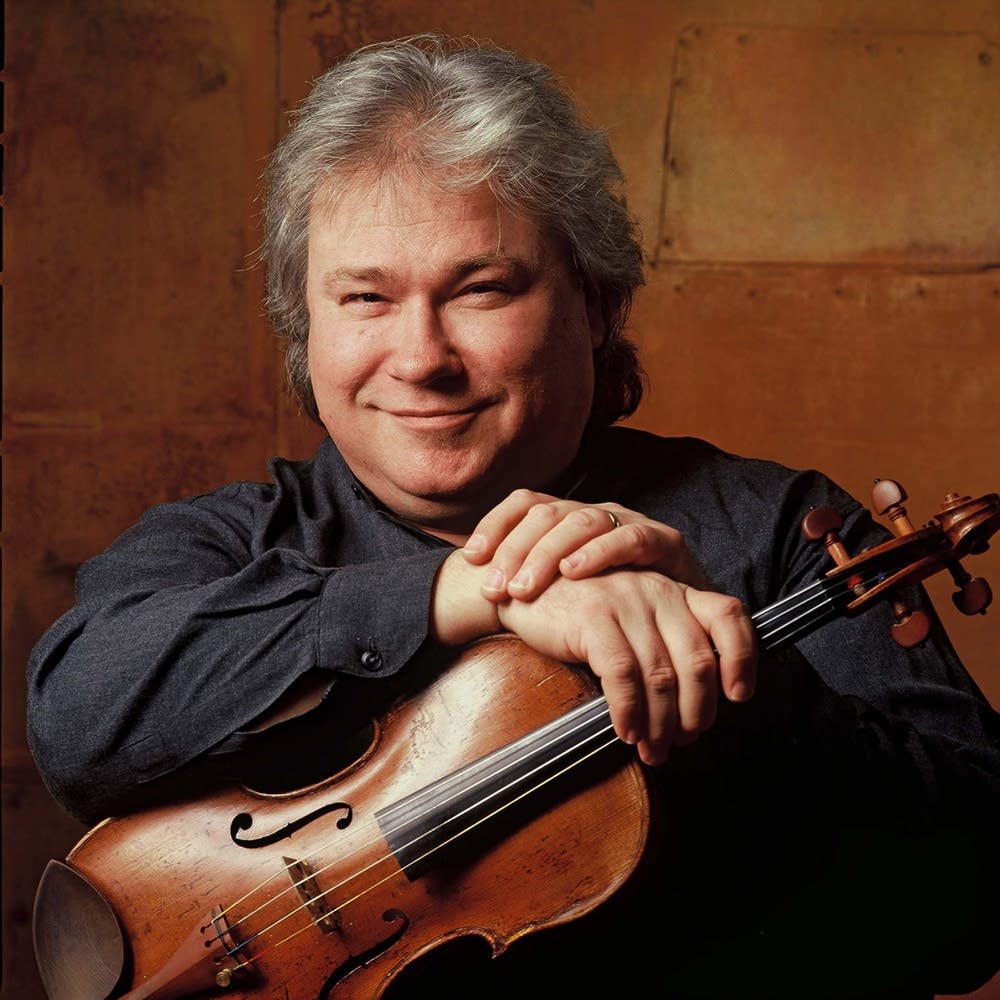 Tim O’Brien
February 25, 2021
Yesterday we lost one of the best that’s ever been. Peter Ostroushko was one of the all-time greats of the mandolin, with a beautifully expressive touch and a unique sense of harmony bred in his Ukrainian family home in northeast Minneapolis. My thoughts go out to his wife Marge and daughter Anna, and siblings Ludmilla, George, and Taras.
I first met him in 1974 at the Walnut Valley Festival in Winfield, Kansas. He was hanging with a group of fellow Minnesota musicians, including Bill Hinkley, Judy Larson, Rudy Darling, Mary MacEachron, and Sam Dillon. On visits to Minneapolis, I would sometimes hear Peter play on the Prairie Home Companion or at a bar somewhere with Becky Reimer’s country rock band. But I got to know him best while he was touring with Robin and Linda Williams, and I was touring with Hot Rize. I learned a lot of tunes from him backstage at clubs and festivals. In those years he was devotee of Jack Daniels whiskey, and I think he kept ready half pint in his mandolin case. The case itself was artfully covered with Jack Daniels labels that he’d glued to the outside for extra protection from the elements. A gifted songwriter and singer, he also played fiddle and guitar like the wind.
He’d studied acting in high school and had developed his acting skills later playing parts in Prairie Home Companion skits. Red Knuckles and the Trailblazers had many different guest fiddlers, all using the stage name Elmo Otto, posing at steel player Waldo Otto’s long-lost brother. Peter invented his own guest fiddler character – Blade – brother to our mysterious bassist Slade, and just as inscrutable as his sibling. He later developed the character Maksim “Hank” Chencho, who sang Hank Williams (and Chuck Berry) songs in Ukrainian. When he organized his wonderful mandolin quartet The Mando Boys, he again assumed the character and led the group as Maxim in Ukrainian.
A rolly poly guy who loved to eat, he once took me to the Ukrainian Union in New York City for an amazing meal. Afterward we walked through Greenwich Village, and stopped in at the Village Vanguard to hear a set by Monty Alexander, Herb Ellis, and Ray Brown. Another time I watched him recreate his mom’s hearty borscht in the kitchen of his and Marge’s Nicollet Island apartment. Mmmm boy.
Peter got sober in 1982 and stayed that way. He burrowed more deeply into his own muse, writing and recording many albums worth of original music, performing mostly in a duo setting with either Daithi Sproul or Dean Magraw on guitar. In his ongoing performances on Prairie Home Companion, he took it upon himself to come up with original music on a weekly basis.
On New Year’s Eve 2017, Peter suffered a heart attack, followed by a massive stroke the next day, and he fought valiantly to recover. He progressed enough to walk with a cane but never regained the use of his left hand. This was a tragic event for him and so many who love his music. I last saw him at the Dakota in Minneapolis in March of 2019, when he and Marge came to my band’s show. (As a child our fiddler Shad Cobb had at one point traveled with his father and brothers from Wisconsin to take lessons from Peter.) In April my buddy Bryan Bowers lent me his old Gibson mandocello, and I listened to Peter and then Mando Boys for inspiration on how to play it. Last November, I got a new instrument – a Nugget 10 stringed mandolin – and thought Peter would like to see it. I sent him a video of the first time I tuned it up. The next day we had a nice long conversation on the phone.
In that conversation we talked a lot about mandolin music we liked, and about his new podcast series. After the stroke, he’d gotten access to his many recorded performances on the PHC, and he made plans for a multi cd release of them. That plan had changed he told me, and he’d been making podcasts where he introduced the performances and told stories about those amazingly productive years. He told me how he’d recently given some of his mandolin family instruments to the MacPhail Center For Music where he’d taught, and that he’d also helped former PHC staff musician Richard Kriehn get his old teaching job there. I know the past three years have been incredibly difficult, but I got the sense that he’d made peace with the loss of his playing abilities and had found a way to keep going and to stay involved in his beloved music.
This morning has been a tour through many memories of my old friend Peter. Jan and I listened to one of the podcasts and I’m so happy he produced them. Hearing his voice, his fiddle, guitar, and mandolin is a blessed gift he left for us all.

Peter Ostroushko – Musician
For those who like to keep track of these kind of things: On Over The Waterfall, as we enter into the music Dave is playing the melody in the key of D which is where fiddlers play the tune. When Dave finishes I change the key and play it in G. Then I play harmony to Dave’s melody, then we play it on…

Kerry Parker
Thanks for this tribute and these fond memories, Tim. Such a fine, funny, talented man.

Marla Schwaller Carew
We saw him live (10 years ago?) in Michigan (he came to a UU church that hosted an acoustic coffeehouse on some weekends) and he was so good, and so funny. Kept returning to jokes about how his people were “built low to the ground for picking potatoes.” What a treat to hear his music and his storytelling.

A Kathleen Jackson
Comfort and peace to all who mourn this great artist! Thanks Tim for sharing

Carol Siegel
Thank you Tim. A fine musician and human being who overcame great adversity. May his memory be for a blessing.

Trish Saylor
I’m sorry to hear that. I love his music. What a wonderful tribute you have written.

Celeste Brown
I learned about Peter from his many visits to Prairie Home Companion, and have spent countless hours enjoying his music. Truly a sad loss.

Joe Barfoot
Very nice memories you shared. I spent many years listening to Peter, starting in the Winfield days. He was also a great compliment to Norman Blake in their collaborations. Thanks for sharing your thoughts about him.

Jerry Erickson
Thanks for the wonderful remembrance, Tim. I’m sure I have an album by Peter in my collection. Time to dig it out and dust off the turntable.

Rhonda Presson
I used to be involved in bringing musicians to our House Concert series in Springfield, MO. He and Dean came and it was one of our best. What a sweet man he was. May he RIP.

Crilly Ritz
My condolences. Was fortunate to have seen him perform at Wintergrass. If my memory serves me, he also played on some of the Bob Dylan Blood On The Tracks sessions.