Protests continued for a third night in Kenosha, Wisconsin, over the police shooting of Jacob Blake. However things turned ugly and violent when a 17 year old boy from Illinois was filmed shooting at protested and killing at least two people at the spot with AR-15 Automatic riffle. According to several media reports on August 25, 2020.

Kyle Rittenhouse, age 17, killed 2 people & wounded another last night at a BLM protest in Kenosha, Wisconsin. He belonged to an armed right-wing militia, & video showed police thank him & give him water prior to the killings.

This is Kyle Rittenhouse, 17, an Illinois resident who was just charged with first-degree murder of two people last night in Kenosha, Wisconsin. This teen, whose social media history is full of misogyny and white supremacy, had easy access to an AR-15.
pic.twitter.com/OsfXzSHy5M

He shot several people ended up killing 2. Then is able to casually walk around police as if he didn’t just murder!

After alleged mass shooter Kyle Rittenhouse shot several people in Kenosha, he casually walked towards police and gave them what appears to be a pre-planned hand signal. Terrorist impunity.

The police are working hand and hand with these terrorists groups pic.twitter.com/NIzQTwQubj

WTH!!! Enough is Enough😡😡 Meet Kyle Rittenhouse Kyle Rittenhouse is an avid Blue Lives Matter supporter and member of a right wing militia group. Last night Kyle traveled 30 miles from Antioch IL to Kenosha WI to “patrol” the streets of Kenosha with an AR-15. He was not stopped by Kenosha police, questioned or told to stand down. He later shot several people in Kenosha Tuesday night. This American Terrorist was not arrested, still on the streets and is a “person of interest.” Do remember that Jacob Blake was unarmed when he was shot in the back 7 times by Kenosha police in front of his 3 sons.

This savage is Kyle Rittenhouse, 17. Killed 2 wounded 1 last night in Wisconsin. Video showed police thank him & give him water prior to the killings. As he and other right-wingers fired into the crowd of peaceful protesters police did nothing according to several eye witnesses 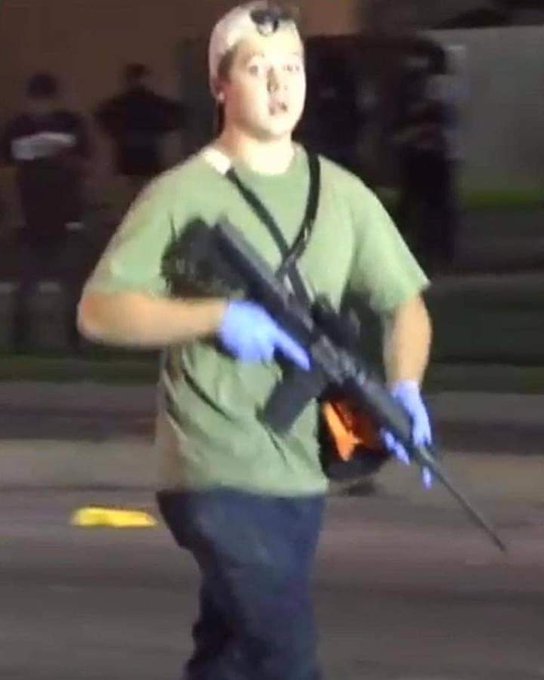 I am OUTRAGED. Jacob Blake was unarmed and shot in the back SEVEN times for walking back to his car while Kyle Rittenhouse shot 4 unarmed PROTESTERS, killed two of them, and went home to sleep in his bed that night! THIS WAS THE SAME POLICE DEPARTMENT!

I recall a main talking point of “Blue Lives Matter” when Michael Brown was killed was that “why are they calling him a kid? He was 18 and he ran!” So, why are you calling Kyle Rittenhouse a kid? He’s 17 & crossed state lines in illegal possession of a gun and committed murder.