FORMER REPUBLIC OF Ireland international and Arsenal assistant manager Theo Foley has died at the age of 83., according to a statement posted online on June. 24, 2020.

The Dublin native, who earned nine caps for his country, represented Home Farm and Exeter, Charlton and Burnley during his career. He also captained Northampton Town in the English First Division. The42.ie reported.

So sad to hear about the passing of one of footballs good guys Theo Foley. RIP Theo. We all owe you for making us smile and laugh and lighting up every day we worked together.

During his footballing career, he played as a defender for Home Farm, Burnley, Exeter City, Northampton Town, and Charlton Athletic.

Mark Antony Bullard wrote
Very sad of the passing of Theo foley, a very respected coach who was an excellent partner to George! Had the pleasure to meet at his book signing with yourself,David Hillier and Perry Groves, excellent night! Thinking of Theo’s friends and family xx

Nick Mason wrote
and I had the pleasure of meeting Theo Foley at @PieburyCorner
Even as people came up to speak to him and have him sign his book he wanted to continue our conversation about our trip to the Emirates and to see Arsenal. Sorry to hear about his passing.

Alan Smith wrote
Devastated to hear about the passing of Theo Foley. He was a kind, generous and very funny man respected and loved by everyone @Arsenal . Thinking of Sheila and family at this tragic time 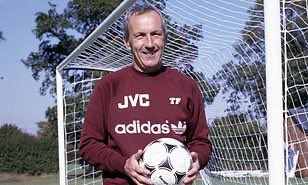 Very sad news! Condolences to his family & friends. I remember back in ’99, I stop Theo Foley on Colchesters’ high st and asked him for his autograph. He looked shocked to be asked, but was a true gent & obliged. Still have it to this day with the rest of my Arsenal memorabilia.